I am a Sound Healer, Sound Ceremonialist, Photographer and freelance Website Developer, with a Masters degree in Physics and a corporate background as technology developer for Philips Innovation Services and principal software engineer / architect for website development at eBay.

From my childhood I've had an awareness of the multi-dimensionality of my Being.

The name of my website, Kagalakan, is a Filipino word meaning ‘joy’, ‘excitement’, ‘rejoicing’.

A selection of prints of my art creations are for sale in my store on Etsy.

I've had an international corporate career as physicist and software engineer. After living for nearly 20 years in hectic and busy San Francisco I moved to Mount Shasta, a quiet mountain village in Northern California. There I now provide healing services and facilitate spiritual retreats. I'm still available for short-term remote website development projects.

Coming from an artistic family, throughout my life I have found balance and a creative outlet in music, drawing, watercolor painting and photography. In my photography I look for the beauty, wonder and awe of nature and the human form. My art in general reflects a spiritual worldview, a notion of being one, an expression of an omnipresent consciousness. For my musical expressions I use instruments like didgeridoo and drum, and the most magical instrument of all: the voice.

My life is a demonstration of living in tune with —and following direction of— an Inner Knowing.

For an overview of my inner journey, please continue here….

I'm gratefull for the opportunities I've had in my life to learn, to experience and to re-awaken the memory of who I really am. Below follows a chronological overview of my life's inner journey:
↪ In my teens I had an awareness of the multi-dimensionality of my being. In hindsight I now realize this, but at the time I just felt like I had different views on my reality: as the child that I was to my perceived reality in 3D, and higher dimensionally as an older man guiding the child, and as a non-judgemental, objective observer.
↪ In the early 1990's I found inner and outer balance through intense practice of Shaolin Kempo martial arts; three evenings and one morning each week for several years. In the same period I was studying Physics at Eindhoven University and joined a watercolor painting class.
↪ In my mid-twenties I started a deeper search for the meaning of life.
↪ I was introduced to a lecture about Reiki, took a workshop the next weekend, and started participating in healing sessions with a local group of Reiki practioners. I regularly received comments that my hands were the most energetic of the group and that I placed them in exactly the right spot. I soon realized the constraints of this system, and stopped using the symbols and particular Reiki methods. Instead, I simply got empty and let my intuition guide my hands. My results were just as strong —if not stronger— as when I was following the Reiki guidelines.
↪ In the mid 1990's I participated in several consciousness exploring workshops in the Netherlands and the USA. We traveled through space and time and experienced the effect of ecstatic body postures. This expanded my perception of reality and opened my inner senses. I feel this laid the foundation for my later explorations.
↪ I practiced buddhist meditations very early in the morning before I went to my regular day job as physics engineer for Philipps Electronics. In addition I took lightbody meditation workshops and studied and practiced several healing modalities such as Soul Fusion, the Christopher Method and Butterfly Massage.
↪

In 1995 I made a trip to Nepal, including a mostly solitary week-long hike through Langtang National Park in the Himalayas (view photos). I was struck by the beauty and spiritual light shining through the eyes of the Nepalese people and was inspired by their ceremonial slow pace of living. Returning quite sick from my trek through the Himalayas I spend a few days in Kopan monastery (close to Boudhanath just outside Kathmandu), sleeping above one of the large gathering rooms where most of the day I could hear the monks chanting and praying. After attending a few core buddhist teaching sessions I realized that their dualistic teachings and belief were not my path.
↪ I took didgeridoo playing lessons; I had a really difficult time trying to get a sound out of the practice instruments that were supplied by my teacher. Then after a few lessons I had an opportunity to check out a collection of authentic didgeridoos for sale, had a dream about a didge, recognized the one from the dream among the collection, bought that didge, and on arrival home could play it, circular breathing and all.
↪ In the mid-late 1990's I travelled through the south of France, following the path of the Black Madonna as she appeared in the local churches, and in the north to Chartres and Versailles, taking in the Christed energy still present there.
↪ Late 1996 I followed the voice of my heart, quit my job and moved to the USA. In the early years there I provided healing services.
↪ 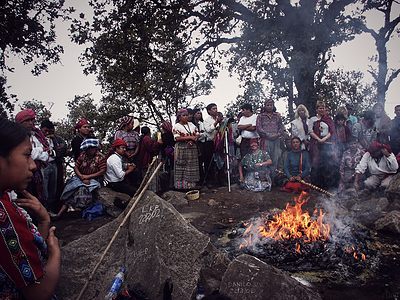 In 2002 I had the fortunate opportunity to join the second group of foreigners that were allowed and invited to join Mayan New Year's fire ceremonies and celebrations in Guatemala (and Honduras) over a three week period (view photos). I learned about the Mayan calendar from the lineage of time keepers, and their mixed feelings about the dreamspell calendar by José Argüelles so popular in the West at that time. I was invited to join in sacred toad ceremonies but felt no desire then (or ever before or since) to take any hallucinogenic substances. My own natural experiences are transformative enough and I know they provide an opening and consciousness expansion in a gentle time-appropriate way.
↪

In 2004 I went on a guided tour to Egypt, visiting different pyramids on and around the Giza plateau (view photos). I had a transformative experience in the granite box (the so called "sarcophagus") in the Great Pyramid when I was lucky enough to lay there for a little while with nobody else around. I met Mr Hakim (Abd'el Hakim Awyan - see photo) a mystical wisdom-keeper who came from a long lineage of wisdom keepers. He told fascinating stories about the pyramids, anti-gravity devices that are currently on display in the Cairo museum, and his journeys through the hidden pathways below the plateau. I had the opportunity to visit many of the lesser known pyramids in the surrounding area.
↪ The early years of 2000 were relatively quiet, I was consumed mostly by my daytime job as principal software developer for eBay. In my weekends I became more active with my photography.
↪

In March 2014 my beloved companion-in-dog-disguise “Louis” died, while visiting Mount Shasta. The next three days I witnessed his transition; a life-changing experience. I had never considered living in Mount Shasta, but three months later I felt a strong call, I went again on a long weekend, found and bought a house that same weekend, and within a week I moved to this powerful location. I worked one more year remotely for eBay, but finaly quit my job in 2015, to dedicate my life assisting people in their spiritual awakening.
↪ For those of you sensitive to energies, I've compared living in Mount Shasta to being impacted by the full moon energies, tenfold, on a daily basis. All emotions are intensified greatly, and what was burried deep inside will surface.
↪ ... and the journey continues and deepens...